Talking to Canadians: Some Surprising Findings 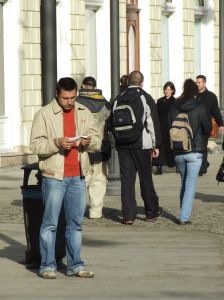 Students in my “Evangelism in Cultural Context” class went out into the neighborhood around the college a couple of weeks ago to talk to people about Christian faith. The questionnaire (put together the previous week) asked about: (a) people’s present spirituality (b) what they knew already about Christianity and (c) what might cause them to investigate Christian faith further. The results were intriguing, and there was more good news than bad. Out of 85 respondents, most of them aged under 25, fully two thirds had a Christian background of some kind. One third had grown up Catholic, though few were committed to Catholicism today. About 10 identified as practicing Christians in one tradition or another. The others came from a wide range of churches. As a result, when asked what they knew of Christian faith, most were able to say such things as “Jesus was the Son of God”, “he died on a cross”, or “he came back from death.” So much for “secular”Canada. There are clearly many people, including young people, out there who still have some “Christian memory.” For them, evangelism does not have to start from scratch.

The Christian memory was somewhat fuzzy when it came to people’s understanding of the Gospel. Most said the message of Christianity was primarily ethical—“To make the world a better place,” or “To be kind to people.” Not that these are completely wrong, of course, but are they the heart of the matter? It was interesting for instance, that not many people mentioned Jesus! In fact, Muslims (of whom we talked to nine), gave more complete and theological answers, such as, “God is one, Jesus is God’s son, act like Jesus.” One particularly fruitful question was “If you could ask God one question, what would it be?” Most of us expected “Why suffering?” to be top of the list, but perhaps surprisingly, 23% wanted to ask, “What is the purpose of life?” Suffering was the second most frequent question (18%), and 9% wanted to know about life after death. We also encountered unique questions like, “Were there ever unicorns?” and “Why do I turn red when I’m nervous?” (This person had in fact turned red during the conversation.)

We asked, “If you know Christians, what words would you use to describe them?” About 120 positive adjectives (caring, intelligent, cheerful) were used, compared with 26 negative ones (hypocrites, naïve, self-righteous). Whatever image Christians may have in the popular media, the impression made by real-life, flesh and blood Christians is on the whole positive. This probably had an effect on answers to the question, “What might cause you to be interested in Christian faith?” Three questions began with, “If a friend invited you”: the options were “to church”, “to a discussion group” and “to a lecture on a topic of interest to you.” Other possibilities were “reading a book by a Christian on a topic of interest to you” and “in time of personal crisis.”

Responses were in the mid-20’s (22%, 25%, 24%) for church, a speaker, and a book. Small groups were less popular (14%), probably, as some said, because it was somewhat threatening. A similar number (14%) would turn to Christian faith in time of crisis. The willingness of people to go with a Christian friend to a Christian event (even church!) was quite startling. We didn’t ask whether they would go “without a Christian friend”, of course, but it seems likely that the friend is the factor that makes the difference. Overall, we were encouraged by:

(1) The willingness of people to talk about such personal matters. Very un-Canadian! Probably the fact that interviewers were asking for help (“we have this awful assignment to do . . . can you help?”—what one called the pity factor) rather than seeking to deliver a message made a difference.

(2) The degree of knowledge (however hazy) of Christian faith there still is in the minds of (apparently) unchurched students.

(3) That so many were open to considering Christian faith. The challenge, of course, is for Christians to make friends with people who believe differently, and for the Christian community to dream up the kind of events which would provide an open door in to a consideration of Christian faith. Finding a creative way to address questions like the meaning of life and the problem of suffering would seem like an appropriate place to begin! Discovering people’s openness is only the beginning. After that the real challenge begins. But it’s a good beginning.