Christmas at the Movies: How the Grinch Stole Christmas 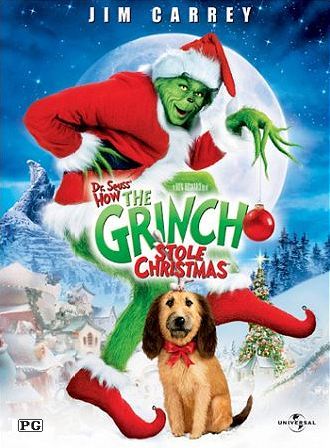 Stories are amazing things. Some of them crop up in every culture in every century. Sometimes they turn up in different forms, but still with a recognizable family likeness. There seems to be something about certain stories that appeals very deeply to the human race.

I think this is probably one reason we love the Grinch. The heart of the story is really very simple. The Grinch, who is green and ugly and mean lives outside Whoville in a cave on top of Mount Crumpet. He hates Christmas for the simple reason that his heart is two sizes too small. So he hates the fact that the people of Whoville enjoy Christmas. He comes up with a very simple plan: he sneaks into the village on Christmas Eve and steals all their toys. Then he waits to hear their wailing . . . but it never comes. Instead he hears them singing for joy because they know that Christmas is not about presents, and the fact that their presents have gone doesn’t faze them for a second. The Grinch realizes the error of his ways, his heart grows three sizes bigger, he gives the gifts back, and joins in the fun.

I suppose the main theme in the book version of the story is the idea of the outsider, mean and ugly and scary, who has a change of heart, a conversion—something Tolkien called a “eucatastrophe.” If a catastrophe turns everything upside down, a eucatastrophe turns everything right side up, so that there can be a happy ending. There are lots of outsiders in our stories—giants, ghosts, witches, trolls, magicians, you name it. Some are changed (like the Grinch), some are not (like Macbeth). When they’re converted, it makes the story into a comedy; when they’re not, it makes a tragedy.

But the movie adds two things in particular to the book. It develops the character of Cindy Lou Who (who just has one line in the book). Really, she becomes the Grinch’s saviour: she is the one who believes he can change, goes up to the top of his hill through all the snow (“on a mission” as the narrator tells us), and invites him to come to the celebration in the village. And as so often in the stories, she’s an unlikely saviour: she’s only a little girl, after all, and (as the mayor points out) her nose hasn’t yet grown in (like the rest of the Who’s) . . . so what does she know? She’s in good company: saviours are usually the last people you’d expect: the miller’s youngest son (not the strong, good-looking oldest son); Frodo and Sam, little Hobbits from an obscure place called the Shire (which most people in Middle Earth have never heard of); Lucy, the youngest of the children in the Narnia stories.

The other thing that’s new in the movie is that the Grinch once lived in Whoville. In the book, we never hear how he got to live on the mountain. But in the movie it’s because he is ugly, and he’s made fun of by the other children, and he runs away. So at the end of the story, when he comes to Whoville, it’s not coming for the first time, it’s coming back to the place that was once his home and that he left. This idea of a journey also comes up in stories all over the world. From the Odyssey, where Odysseus goes out and has adventures and finally comes home again, to the Lord of the Rings.

So three themes: the nasty, mean outsider; the unlikely saviour; and the journey back home.

Why do we like stories like this? Tolkien said it’s because those stories are echoes of the Great Story, the story God is writing about our world and about the human race. They remind us of what God is like, or maybe they prepare us to hear the stories of what God is like. And because the story God is writing is so profoundly true, and so profoundly beautiful, these echoes of the Story touch us deeply, and so we tell and retell them in a thousand forms. And maybe God is trying to get our attention through those stories.

So the story of How the Grinch Stole Christmas actually resonates with that other story. Think of it this way:

1. Why do we like all these stories about outsiders? Because at some level we know we are the outsider. We all feel like outsiders in one situation or another. So we feel for the outsider, we identify with the outsider, whether the outsider is bad, or simply misunderstood, or a prince under an evil spell. We identify with all sorts. And maybe at some deep intuitive level, we have a memory of being expelled from the Garden of Eden (however you understand that story), and that we’ve been outsiders to God’s plan for us ever since. The outsider: that’s us.

2. Why are we drawn by these stories of unlikely saviours? Tolkien would say it’s because the saviour of the world is not who you would expect in a million years: born in Nazareth (a bit like Newfoundland might be to . . . some people) in a backwater of the Roman empire, a carpenter who never wrote a book, never went to university, and didn’t look like what anyone expected the Messiah to look like. Isaiah wrote, “There was nothing attractive about him, nothing to cause us to take a second look. He was looked down on and passed over.” And yet, says, St. Paul, God takes pleasure in using the weak and foolish and marginalized things that others don’t care about. A baby of dubious parentage born in a donkey’s manger, because there’s no room for him in the inn. An unlikely saviour indeed.

3. And then there’s this idea of the journey, where you leave home, have adventures both good and bad, and then finally come home again. In a sense that’s the story of the human condition: that the human race began as friends of God, servants and children of God, but then we chose to go our own way: as Jesus explained it, like a kid who runs away from home to have a good time, at least until the money runs out . . . and then grudgingly comes home.

The Grinch is about us: choosing to be outsiders to God’s joy and home and family, and an unlikely saviour who comes to invite us to the party, and a journey back home. There is a place in the teaching of Jesus where he sums up these three themes. It’s not a reading we usually associate with Christmas, but it is really. Listen to the story:

‘Which one of you, having a hundred sheep and losing one of them, does not leave the ninety-nine in the wilderness and go after the one that is lost until he finds it? When he has found it, he lays it on his shoulders and rejoices. And when he comes home, he calls together his friends and neighbours, saying to them, “Rejoice with me, for I have found my sheep that was lost.” Just so, I tell you, there will be more joy in heaven over one sinner who repents than over ninety-nine righteous people who need no repentance. (The Gospel of Luke 15:3-7)

The story of Christmas is the story of the good shepherd (in those days not the romantic figure we have made him into, but another unlikely saviour) who comes to look for the sheep, the outsider to the rest of the flock, the one that’s strayed from the fold, and then bringing it back home, so that the great party can begin.

And that’s what Christmas is really about: the shepherd coming into our world to search for the lost sheep, and to bring it home on his shoulder. The only question is . . . when he comes looking for us, are we willing to be found?