How to Invite a Friend to Church 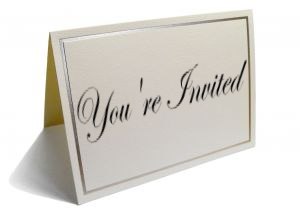 You’re thinking of inviting a friend to church? My first piece of advice: Don’t.

At least, don’t do it on an average Sunday. Unless, of course, your friend has said, “You know what? I would just love to see how an Anglican church operates on a typical Sunday when you’re not making special allowances for visitors. That would really be my idea of a good time.” That would be different.

In general, however, that is not the attitude of the Canadian non-church-going public. To the majority, the idea of going to church is not high on their checklist of goals to fulfill before they die. So there needs to be some reason why, if you were bold enough to invite them, they might be bold enough to say yes. What kind of reason might that be? Let me suggest two:

• Carol Services are great for this. Everybody loves a carol service. The tunes are familiar—if only because we’ve been hearing them at Shopper’s since the day after Halloween.
• The Blessing of the Animals, liturgical challenge though it may be, is intriguing to someone who doesn’t normally come to church.
• In St. Matthew’s Cathedral in Dallas, Dean Kevin Martin does an annual service to thank workers in the food industry in the city. They come in their droves. They have never been thanked publicly like that—let alone by the church.
• A sermon series can be of interest to people. At the local street festival a year ago, my own church invited passers-by to write on a flip chart the questions they would most like to ask God, promising that the sermons in the following months would address those questions.

2. If our hope is that our friends will find something attractive about the expression of Christian faith they find at church—might there be other settings where they could experience that more easily than in the unfamiliar setting of a church service?

What about “half-way house” events, where the spiritually curious can encounter Christians and their spirituality outside the context of as Sunday service? Jenny Andison, in her helpful booklet, Doors into Faith: Inviting Friends the Join the Big Game (Wycliffe Booklet on Evangelism #4), has great suggestions. Here is a sampling of some possibilities churches have tried:

• What about forming a group of friends—Christians and others—who meet to watch movies with spiritual themes and discuss them?
• How about a nice dinner to which you invite a Christian speaker known in the community—an athlete, perhaps, or a local MP—to talk about their work and their faith?
• Many Canadians would like to make a difference to this country’s problems. I heard recently of a man who had first encountered followers of Jesus when he offered to help with the food bank at their church, and then gradually found his own way to faith.

Having said we need suitable events, of course, we want to be sure that if we take the risk of inviting someone, they will be well-received. To be honest, I’m simply not going to risk their feeling alienated and my being embarrassed unless the greeting system is warm, competent and genuine. Unfortunately, this doesn’t always happen, and the horror stories are legion. (I have written more about the art of welcoming in the Wycliffe Booklet #6, From Visitor to Disciple: Eight Ways Your Church Can Help.)

Let’s assume then that (a) there is a suitable event that our neighbour might actually be interested in and that (b) as far as we can tell, it will be a positive experience. What then?

Here are three practical things I find helpful myself:

• I like to have an official invitation card or flyer about the event to give. Apart from anything else, it saves me explaining every single detail, and provides a reminder after the conversation is over.
• I want to be fairly sure there really is a natural connection between my friend and the event. My neighbour’s 10-year old bought a goldfish bowl from us during the local garage sale in the summer. In September his mother told me he had now bought a goldfish to live in the bowl. So I said, “I wonder if he’d like it to bring it to church for St. Francis’ Day when we bless people’s pets?” “Wow, that sounds neat!” she replied. Without the goldfish connection, the invitation would have sounded a little forced. With the goldfish, it was the most natural thing in the world.
• I always try to give people an out—“Of course, I know that’s a busy time of year” is a fairly safe one—which makes it easy for them say no. I might even say, “Personally, I hate pushy religious people, so I’m a bit nervous to suggest this . . .” Usually that reassures people, because you’ve shown consideration for their feelings—and clearly you’re not pushy!

Will it still be scary? Probably. Hey, I’m a Professor of Evangelism, and I certainly find my heart beats a bit faster when I’m inviting someone to a church event. But fear is not the worst thing that could happen. Some of the most rewarding things we ever do were scary once. I find I am encouraged by that book title which says, Feel the Fear and Do It Anyway. It’s not bad advice.

(This article first appeared in The Anglican, newspaper of the Anglican Diocese of Toronto, in February 2008.)