One Size Does Not Fit All: Seven Ways to Evangelize

The heart of evangelism is always the same—helping people take steps towards faith in Jesus—but the ways in which it happens can change from culture to culture, and decade to decade.

Example 1: I am currently editing the letters of Vincent Donovan for Orbis Books. Donovan was a Catholic missionary among the Maasai in Tanzania in the 1960’s and 1970’s. He went from village to village, asking if the people would be interested in talking about God. Their response? “Who can refuse to talk about God?” Donovan went back week by week to teach the Christian faith, and at the end of a year invited the people for baptism. He had an amazing ministry (the story is told in his 1978 book, Christianity Rediscovered)—but I can hardly imagine an equivalent in Canada.

Example 2: Bill was a Baptist pastor I used to know who became a Christian as a teenager. Several of his friends had made a Christian commitment, and Bill was the last holdout. So, one Saturday night, the group got into their van, and told the unsuspecting Bill they were simply going to drive round and round until he gave his to following Jesus. I forget how long it took, but eventually he gave in. Twenty years later, his commitment was still real, though by then he could laugh about the way it happened. (I hasten to add that this is not a method that we teach or recommend at the Institute of Evangelism.)

If those are two ways of evangelism—both fruitful, but neither exactly repeatable—there are others. Christianity Today recently ran an article by Tim Stafford (http://www.christianitytoday.com/ct/2007/september/36.68.html) , suggesting that, while crusade evangelism had been popular in the 1950’s and 60’s, by the 70’s the emphasis had switched to relational, one-on-one, “friendship evangelism.” Today, suggested Stafford, the emphasis in many denominations is on church planting as the most effective way of helping people take steps towards Christian faith. (This is why the Institute was a co-sponsor with the Diocese of Toronto of the 2007 and 2008 Anglican Church Planting Conferences.)

However, two other ways of evangelism occur to me. One is congregation-centred evangelism. The principle is that, if congregations are healthy, then they will be a natural focus for evangelism: those who are exploring their spirituality will be drawn there, feel comfortable there, find opportunities to explore and understand discipleship, and finally become Christians. This has been the thrust of the Institute’s ministry since its inception, and it remains a central and effective strategy.

Recently, however, I have begun to hear people contrasting a “come” style of evangelism (“Come to our special service”) with a “go” form of evangelism (“Go . . . make disciples”). I am not convinced that the distinction is all that hard and fast. It seems to me, for example, that before people will “come,” someone normally has to “go” to them and invite them. But the question has at least alerted me to the thought that there is no reason to put all our evangelistic eggs in the congregation-centred basket—or any other single basket.

Here are some examples of the “go” approach to evangelism I have come across recently: 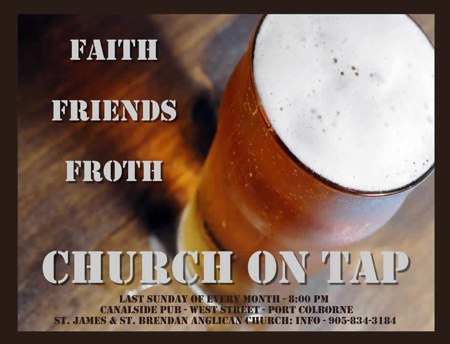 • The Rev. Rob Hurkmans, in Port Colbourne ON, recently started up a monthly church service in the pub called Church on Tap—an informal service where people can sip a beer as they listen to a talk. You can read more about it here: www.niagarathisweek.com/news/business/article/129542.

• Mike Wilkins, a Baptist pastor friend in Toronto, has been running “Alpha in the Pub” for some years. People pay $140 upfront for a weekly drink and a burger in the upper room (yes, really) of a local pub, and watch the Alpha videos. A number of people have been baptized in Mike’s church as a result of this initiative. You can read more about this at www.Godatthepub.com.

• After the First Annual Church Planting Conference in 2007, the Rev. Chris Snow returned to St. John’s NF, and (after discussion with his bishop) hired a curate to start a monthly Saturday night service for families. The name? “Messy Church.” One hundred and ten came to the first one. You can read more about it here: www.toronto.anglican.ca/index.asp?navid=78&fid3=919&layid=18&fid2=-888.

None of these really fits into any of the previously described categories of evangelism. What unites them (apart from the fact that two take place in a pub—which may be significant in itself) is that they are (a) informal (b) not conventional forms of doing church or of doing evangelism (c) meet people where they are—either in the pub or trying to do the best for their children and (d) nurture a slow process of coming to faith.

The Church of England has been promoting such “fresh expressions” of faith in recent years. You can read about them on the fresh expressions website (www.freshexpressions.org.uk) One story I came across was of a priest who has begun leading a monthly Eucharist in his local police station. Twenty or so officers attend, many of whom would not otherwise be regular church attendees.

I am not suggesting that such fresh expressions are “the new wave” of evangelism, and where we should be putting all our efforts. In any case, unless those “free-floating” efforts at evangelism are linked to healthy congregations, they will simply be an evangelistic arm unattached to a church body. And unless there is a strong relational component, they will fossilize and die. So there is actually a natural symbiosis between different forms of evangelism, particularly congregational health, relational evangelism, and fresh expressions.

But such new ventures do encourage us to think freshly about our mission field, to ask questions like: Where do people gather in this neighbourhood? What are their interests? What are their questions? What would pique their curiosity? Why has God put us just here in our neighbourhood? What would be a good venue for those who are not ready for church (however friendly) to begin the journey to faith?

Such adventures will require creativity and courage. But the benefits could be out of this world.