In a Culture Drawn to ‘Big’, Should the Church Really Be Celebrating ‘Small’? We live today in a culture of ‘Big’. Big box stores, Multiplex Cinemas, massive subdivisions, and across North America in the last two decades, something else big-the megachurch. Because these churches are big they can offer the very best music, audio-visual presentations, great sound systems and specialized teaching skills. They are among the fastest growing churches today. However, many of these churches stress that ‘the bigger we get, the smaller we need to become’. Many of them have discovered that to disciple people effectively (or even get to know them) small groups are essential. They’re absolutely right, of course. And we wish them the absolute best in that endeavor.

But what does any of this mean to the thousands of small churches? Are there things that happen in ‘small’ that can’t happen (despite the very best intentions) in ‘big?

Last week three little girls, ages 5, 9 and 10 dropped by our church, while on their way home from school. They asked if the littlest one, Milly, could use the washroom. Afterwards, Amanda, 9, and the clear ringleader, asked if we had any papers that told when church happened. She said she once went to a Catholic school and had decided it was time for her and her sister to come to church. She wanted to know if I could show her around so she knew where to take her little sister when it came time for the kids’ program (which she had read about on the paper). When I showed then the sanctuary, Milly exclaimed, “Look at the pretty pictures!” Amanda knowingly replied, “Milly, those are stained glass windows”.

Amanda informed me that she and Milly would only be here every second week because they were at her dad’s every other weekend. She wanted to know if it was okay for their mom to drop them off since ‘She doesn’t really go to church.’ Kerry, age 10, announced that she might be able to bring her mom along this Sunday. Then the three waved goodbye and continued on their way home.

I was left a little dumbstruck by the whole encounter, but I know one thing for sure: God is up to something in the lives of these 3 little girls: He is doing a new ‘small’ thing. And so I found myself asking a question about ‘small’: What if there hadn’t been a church in their neighbourhood? 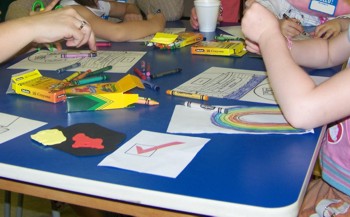 About ten months ago I sat and listened to three couples with toddlers talk about their lives, and explain why they found it so hard to honour a vow they made at their first child’s baptism, when they had promised that child would be “nurtured in the faith and life of the Christian community’. They spoke of both partners commuting long hours to work in the city. They spoke of dropping their kids off early each day at daycare and the guilt they felt doing that. And they spoke about how neither leaving their toddlers in the nursery or keeping them with them in worship worked. It wasn’t that they didn’t want to nurture their kids spiritually. They just couldn’t figure out a way in to do that. Maybe when their kids were old enough for Sunday School. Maybe someday.

That conversation gave rise to another ‘small’. It’s called ‘Messy Church’, and it happens once a month on Saturday mornings. It’s a time for parents and little kids, mainly ages 2 to 6, to learn and worship together. Messy Church has met eight times now. Attendance has ranged between 21 and 38. Almost all of the families who attend were very peripherally attached to the faith community. A few families have now brought friends and their kids. Several grandparents have started bringing their grand kids, whose parents don’t have a church connection. Through songs, games, crafts, stories and DVD clips, we’re reaching children and adults we wouldn’t have reached otherwise.

And so this week I found myself asking another question about ‘small’: if we hadn’t known the initial couples well enough to realize they weren’t at church, how would we ever have connected with them and their kids in a more substantive way?

Out of the blue a man called and asked to talk with a pastor. The man told me his marriage was in serious trouble. He and his wife were new in town and had chosen us because we had the same name as the church they were married in (Christ Church …. go figure!). When I met with them two nights later it became clear that their marriage problems were very much related to deep pain in both of their pasts. They were both the children of alcoholics and had witnessed and experienced serious dysfunction in their families.

Somewhat to my surprise, I found myself inviting them to consider taking part in a program we were starting the very next night called The Twelve Steps: A Spiritual Journey. Five weeks into the program (being attended by nine people), they tell me that for the first time they are talking together about the pain in their past, and about spiritual issues. Last week the women’s sub-group of six all went to a movie together. The husband has decided to take holiday time on several Tuesdays so that his afternoon shift won’t interfere with him doing the program. Last Sunday they came to church for the first time. The husband told one of the Twelve Step leaders that he felt the sermon was ‘just for him’.

And so yet again I found myself asking a question about ‘small’. If the only ‘way in’ to hear the gospel is through a large group worship event followed by the bold step of voluntarily joining a small group, how many people who seriously need to hear good news about the transforming power of God are missing out? The Fresh Expressions movement, sweeping through much of England and now taking off in Canada, tells us ‘small is beautiful’. In its skateboard churches, bakery churches, café churches, and Goth Eucharists they are reaching small groups of people no traditional church (big or small) can reach. I believe small neighbourhood churches can confidently say, along with Fresh Expressions, “Yes, small can be beautiful.” So let’s celebrate ‘small’, by keeping an eye on the big things God wants to do there.