Loving Your Actual Neighbour by Walking the ‘Hood

Loneliness due to a lack of face-time community is a huge challenge in Canadian society today, and Christians are not immune to this phenomenon. Across North America immigrants have been shown to feed church growth, but the longer they live in Canada, the less likely they are to remain in church. “Just living in our society destroys Christian faith and practice”, concludes one seminary professor. Distance between people seems to be on the rise and spreading. When urban newcomers move to rural communities, they tend to retain the same distance they felt was needed to keep themselves safe in the city. Since they are reluctant to connect with people, they often miss out on the rich rural social life. And they don’t join church either.

What erodes faith? Part of the answer is the distance we keep.

The way we minimize contact and conversation is key, so that we are led by our assumptions rather than the reality. Portland, Oregon pastor Sunia Gibbs [of The Parish Collective] describes this phenomenon as the “Privilege of Distance”.”All the ways that our proximity [or lack thereof] to others keeps us from seeing, hearing, acknowledging or understanding their experience. We are so tempted to fill in the unknown with our assumptions instead of really listening or engaging”:

People are suspicious of a cold-call “sales pitch” approach to sharing the gospel. They need to know and trust you before they will consider what you have to say.

So – how can we bring people closer together?

Love your neighbour first by being a presence.

The word “Neighbour” refers to those close to you. Physical proximity combined with genuine affection for the other. But how exactly can we foster relationships of genuine affection in a society in which people are so disconnected from those around them? It turns out it’s not all that difficult.

Spend more time walking your unique ‘hood and discovering who is there.

We’ve become a nation so dependent on our cars. By driving, you might only encounter people once you get to the shop, or grocery store. However, walking your neighbourhood can help you encounter people on the way. So walk as much as possible. Walk it with a friend, with a social worker, with a public official, with someone from church. [adapted from Eat What Is Set Before You,, by Scott Hagley].

Walk the neighbourhood with your dog.

Our Sheltie, Ceilidh, cannot wait to greet and do her charming little puppy dance as we walk in our neighbourhood. I meet many in the town of Fergus, where we live, who stop to chat with her – and sometimes with me. Enabled by Ceilidh’s eager dog-spitality, I was introduced to a neighbourhood Social Media group – and was invited to join. A man walking his landlord’s dog has the same unusual first legal name as mine. A Russsian comrade, pausing to pet our pet, filled me in on the blessings of life in Canada.

Years ago the people of All Saints Anglican Church, located in the Ontario city of Peterborough, tried walking their dogs and picking up litter in the neighbourhood around the church. People came off their porches to greet the pets and talk. By the church’s Christmas dinner, many of those newly-met neighbours came to the feast.

Once you start, keep walking it, being open to chatting with any ”person of peace” (Luke 10:5-6); someone who welcomes you, who enjoys your company as much as you enjoy theirs. This is not intended to be a format to open a canned gospel or invite folks to church. Skeptical Canadians may well not be receptive to you or your invitation to anything until they know you by name and trust that you mean them well.

As I coach congregations how to walk this way, I hear fascinating stories. Lina and Hugh discovered that one of their neighbours was turning ninety-one. Because they were known and trusted on their street, most of the block came to the nonagenarian birthday bash they hosted. Everyone had a great time – a great community builder. Chris learned to cook halal. Pat invited neighbours to church – and they came…and stayed!

Walking your hood – occupying it- can become the most natural thing you do.

Over the years they spent in one church in which I served, Jenn and Sam introduced me to many on their block. They frequently invited neighbours to their home, and invited some of them to church too.

Yet when I asked about the ‘effect’ of these invitations they agreed,

“We can’t think of any stories to share… Lots of people on our street do outgoing & neighbourly things and we’re so aware of our shortcomings and missed opportunities. For those times when we have extended love to one of our neighbours, the circumstances around that now seem so “ordinary” and not really worth writing about.

But here’s one thing we can tell you …we have sometimes had a sense over the years that God might have used us as catalysts, ie, that the Spirit’s work through us has been to foster and give space to the common-grace of neighbourly love among other residents of our block. This happened through settings such as Christmas Drop-In’s, the annual Street Party, Hallowe’en, and so forth, which we have participated in and from time to time given leadership to.”

Walking a neighbourhood may not seem like much, but I know from experiences like those above, that it can make a huge difference. Seriously: who’d think that getting fresh air and exercise could make both you and your community healthier? But it’s true. 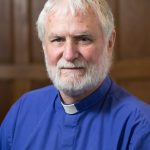 Duke Vipperman retired after 35 years of experience in active ordained ministry in Toronto, with the majority of that time spent leading a parish re-boot at the Church of the Resurrection. In retirement Duke served as a missional coach both in Toronto and in the Anglican Diocese of Huron until he died in early 2020.

View all posts by Duke