Starting from nothing: So how does a new church get planted?

That dream took a big step seven years later. By that time I had been a young-adult pastor for three years and was leading a large group of young adults in an established church. However, throughout those three years the calling to plant a church grew even stronger. From a conversation I had with one of my mentors, I felt the Holy Spirit encouraging me to take the first step regarding this dream that God had placed on my heart. I felt God calling me to plant a church in Aarhus, the second biggest city in Denmark and a thriving university town.

I knew that leading this first church plant might only be for a season, because I had a vision of planting a church in a larger metropolis. I also wanted to build a network of churches with the same mission. Nevertheless, Aarhus was where I felt God leading me right then. I told the board at my [then] current church about my dream, and they graciously decided to support me in every way they could. They wanted to send me out and told me that I could bring people from that congregation with me. I then asked about ten people in my young adult group to come along and start this [new church plant] with me.

We decided to call the new church Haven, because it symbolized the kind of church we wanted to be. After nine months focused on community and vision building, Haven Aarhus launched public worship in September 2015 at a music venue in the downtown core. Haven Aarhus was officially born. Over the last couple of years, God has really done some amazing things through our church. Lives have been changed because of his gospel and grace.

Not long after the initial launch of Haven Aarhus, I started to date my future wife, Kira Stawski. Kira is Canadian and I’m Danish. Before we started to date, we discussed our callings and dreams. They were totally compatible, and we were open to wherever God would lead us in the future.

In March 2016, Kira called me and told me that she thought we were being called to go to Toronto. Honestly, my first thought was, “Over my dead body.” I had never even considered Toronto to be the city where I would plant a church. However, I did promise her that I would pray about the idea. I clearly remember that as soon as I started praying about it, my heart started to turn and it felt like it was burning.

When I visited Kira in Waterloo, Ontario that summer, we decided to check Toronto out together for the first time. I felt like I had stepped into my dream. This was where I could see the vision that I had been given playing out. The calling to Toronto was further confirmed through prayer, prophetic words, and plain old intuition.

I told my leadership team at Haven Aarhus about the dream on my heart and that I felt called to go to Toronto and start another church. I presented the vision of building on Haven Aarhus and planting another Haven church. It was January 2018, and we presented our vision of planting Haven Toronto in 2019. Throughout 2018, we prepared to take this next step.

Toronto in December – dependant on God

I landed at Toronto Airport in the middle of December, 2018, and Kira and I moved into our apartment in Toronto at the end of that month. I knew no one in Toronto. Kira knew two other people that had just moved to the city, but one of them wasn’t a Christian and the other was very committed to another local church. So we really had no one to help us build.

I clearly remember waking up in early January 2019 and thinking “Oh my gosh, what have I done? I know no one here, I’m speaking my second language and I have left everything for this. How is this ever going to work?” The landscape was not encouraging. One pastor told me that when he first arrived to lead a church in Toronto he learned that 22 church plants had recently failed. Another pastor told me that he had seen a lot of church planters come and go. In the worst case scenario, I figured I could always go to Tim Hortons and get a job, or at least drown my sorrow in Timbits.

However, there was an upside to this situation. I felt more dependent on God than I have ever felt before. When I planted for the first time, I at least had 10 people with me as well as a big support network in Denmark. In Toronto, all I could do was drink coffee with people, use our social media platform, and hope that someone was interested in joining our new church.

I prayed like I have never done before. If we were going to succeed in this endeavour, then God had to do a miracle and touch people’s hearts and make them join us. Although we came to Toronto to reach unchurched people, we knew we needed a core group of Christians that could help realize our vision. God would have to bring them.

We had planned an Interest Night at the end of January to be held at Wycliffe College, a theological college at the heart of the University of Toronto. This College had graciously offered their space to us for free. Over the month of January, God started to open doors. Not only did I get my Permanent Residence Visa after only being in Canada for a month, but I also started to connect with people who signed up for our Interest Night. These were people whom we had never met or talked to before.

The Interest Night moved closer. However, two days before it was to happen, Kira and I started getting a little worried. We could see on all the weather reports that there could potentially be a serious snowstorm the day of our planned Interest Night. When the day finally arrived we checked the weather once again. We saw that it was going to be one of the worst snowstorms in years. I thought to myself “I hate Canada.” I do apologize for that heretical thought, but this was so frustrating! We had to postpone the event by a week.

The next week came along and due to the fact that we had changed the date, I wasn’t sure how many people would attend. By God’s miraculous grace (and I can’t point out enough how little this had to do with us) around 25 people showed up. I spoke about why we are in Toronto, what Haven is about, and what our vision is. Again by God’s grace nine people signed up to be part of our new church’s planting team. This meant that Haven Toronto was no longer just Kira and me, but was now eleven people. It’s always great to grow 450 per cent in one night!

The goal now was to build up a community over the next couple of months, because everyone came from different places and with different backgrounds. It was also for them to grasp our vision and really start building up a strong foundation. To this end, we started gathering for dinner every Tuesday evening, where we would meet together and eat, share life, and I would do a short teaching during which I would also cast vision. This also gave other people an opportunity to come and see what Haven was about and to get to know us. After doing these dinners for a couple of months, it was time to take the next step.

We started bi-weekly DNA nights and two weekly life groups. Since April we have been doing DNA and Life Groups, and God has been powerfully at work in our church plant. We have really been growing into a new community. Friendships and strong relationships are being formed. The vision is really catching people’s hearts, and people are growing in their passion for reaching out to their unchurched friends. Four people signed up for our coming baptism service and we are now a small community of around 30 people. But there is more than that. . .

We are launching: Haven Church Toronto

We will officially be launching Haven Church Toronto on September 22nd at the Royal Conservatory of Music. On that day, Toronto will be one church richer.

We have an audacious and big vision as a church: Imagine thousands of Torontonians forever changed by the gospel. We still have a long way to go for that vision to be realized, but we do believe that with the power of the gospel anything is possible. We have seen God move in an unbelievable way already and I think this is just the beginning of something even greater because God has a heart for the city of Toronto. 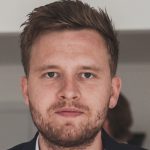 Jesper Jeppesen is the founder and lead pastor of Haven Toronto.
Previously, Jesper has planted a church in Denmark and has been leading a young adult church.
He is married to Kira.

View all posts by Jesper