Precursor to Mission: The Church’s Own Conversion

Anglicanism has been a leader in world mission, beginning its self-conscious outreach in the later 17th century. As it gained steam, this missionary work coincided with Anglicanism’s leading role in local mission, itself tied to the rise of the parish-based Religious Societies, from which the Wesleys and the Evangelical Revival emerged. It is a thrilling story.

Yet all this happened with a Book of Common Prayer (I’ll stick to discussing the long-lived and widely disseminated 1662 BCP here) that said hardly a thing explicitly about evangelism and mission. There are no collects in the BCP about mission or evangelism. No prayers about the lost souls of the unevangelized. No petitions for getting up and going out. Yet Anglicans took the lead among Protestants in evangelism and mission from the late 17th century on, seemingly unconcerned with their prayer book’s silence about all this. Indeed, Anglican mission came to be sustained through its most vibrant evangelistic work with this same seemingly evangelism-bereft BCP. By the early 20th century, a few explicit prayers for mission were added to new BCP editions, but not many. And the irony is that, in the 1970s, when BCPs were radically revised here and there, and materials on “going out to the world” were explicitly woven into its language, these revisions coincided with the withering of Anglican mission, especially in the West. Go figure!

Of course, the BCP is not really silent about mission and evangelism. It is only silent about more modern preconceptions regarding what mission and evangelism might be, preconceptions based on organization, method, and (alas) worries about church membership. Leaving that aside, a mission-infused vision is deeply embedded in the BCP, but one that is tied primarily to the church’s own conversion, a conversion whose integrity is its own converting witness to others.

Students of the BCP—as well as its more Protestant critics—have always noted the moralism of the Prayer Book’s tenor. There is an almost unremitting emphasis on doing “good works”, not, to be sure, in order to gain God’s favour, but as a result of the joyous condition of being saved by God’s grace in Christ. Take one of the few collects in the BCP that we might associate with mission and evangelism, the one for St. John the Baptist: John, we note in the prayer, “was wonderfully born, and sent to prepare the way of thy Son our Saviour, by preaching of repentance.” Our own petition takes up this example as a hope for ourselves. But note the focus. “Make us so to follow his doctrine and holy life, that we may truly repent according to his preaching, and after his example, constantly speak the truth, boldly rebuke vice, and patiently suffer for the truth’s sake, through Jesus Christ our Lord.” Proclamation here is tied to our own repentance, whose embodiment among other factors occurs through our truth-knowing, truth-speaking, correction, and our own suffering for the truth.

All this is completely characteristic of the BCP’s view of mission: preaching is meant to lead to “obedience” in accordance with God’s “commandments” (this, after all, is divine “truth”)—both for ourselves and for others. And this obedience is itself the “preaching” of the Gospel, which is given in the form of following Christ’s teaching and example. One could say, using a popular modern category, that the BCP’s evangelistic focus is primarily on “discipleship.” And “conversion,” with its “changed heart,” is focused on “virtuous and godly living” (cf. the Collect for All Saints Day).

As many have observed, the specific kind of discipleship that the BCP has in mind is one that is mostly socially enacted—oriented, that is, toward “neighbours” and “enemies” both, and lived out through the daily relationships of common life. While there are moments of introspection in the BCP, by and large there is little dwelling upon guilt and subjective freedom—on “feelings.” Instead, the recognition of guilt and encouragement to perform acts of repentance are aimed at a renewed life with others, with (again) “doing good” to one’s neighbour according to God’s commands. Thus, we see in the extensive Offertory Sentences gathered from Scripture, which are said before Communion, a repeated insistence upon using one’s goods and material resources for the sake of others; the initial Exhortation and then Invitation to Communion are all about living in “charity” with others, seeking forgiveness, even making reparation. And, finally, in the wonderful thanksgiving prayers after Communion, the unspeakable fruit of Christ’s gift of himself to us is that we, in turn, “offer ourselves, our souls and bodies” as a “sacrifice” within the world of our daily relations to the Lord, doing the “good works” that God has “prepared for us to walk in.”

It should not surprise us, then, that one of the BCP’s most “missionary” prayers, in a popular sense, is located within a petition for the Church’s own integrity, the “Prayer for All Conditions of Men”. The prayer begins with a kind of “Great Commission” theme: “We humbly beseech thee for all sorts and conditions of men: that thou wouldst be pleased to make thy ways known unto them, thy saving-health unto all Nations.” This is one of the only places in the entire BCP where there is an explicit prayer for “all Nations.” But the collect itself goes on to specify the shape of this mission: it is to be given in the form (“estate”) of “the Catholick Church; that it may be so guided and governed by thy good Spirit, that all who profess and call themselves Christians, may be led into the way of truth, and hold the faith in unity of spirit, in the bond of peace, and in righteousness of life.” As I noted above, mission here is given in the form of the Church’s own conversion; and that conversion is given in the form of an obedient life of discipleship.

Of course, such obedient discipleship is offered explication in the words of the Lord himself; that is, in the Scriptures. It is here, finally, where the BCP truly offers its call to missionary evangelism: in the Psalms and in the Gospel and Epistle texts laid out for every Sunday and Feast day, and appointed for every other day of the year. Within the BCP, almost every reference to “preaching” and “witness” and “the nations” is found in these printed scriptural texts—and there are many of them. The BCP’s theology of conversion and embodied discipleship fundamentally orients the Christian to God’s Word.

Only here, in the Scriptures, is offered that inspiration, guidance, and example, those powerful instruments by which Anglicans were impelled and sustained around the globe (and in their neighborhoods) in their missionary efforts during these past centuries and still now, vitally, in Africa and Asia in particular. And why not here? God’s work in Christ calls and empowers us to be the disciples of the crucified and risen Lord, and just following this call leads us ever more deeply into the Scriptures, whose divine Spirit leads us out into the world. So we pray. 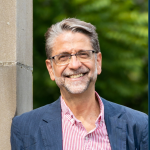 Ephraim Radner teaches Historical Theology at Wycliffe College. He was raised in Berkeley, California. After seminary he spent years in Burundi (East Africa), Cleveland, OH, and Colorado, before an opportunity opened up at Wycliffe College, where he moved in 2007 with his wife, Annette Brownlee, who was ordained in 1987. He continues to be involved in local congregational and even wider church life and is particularly blessed by the work at Wycliffe helping to form new ministers and scholars, and by the chance to do theological research for the service of Christ’s church.

View all posts by Ephraim