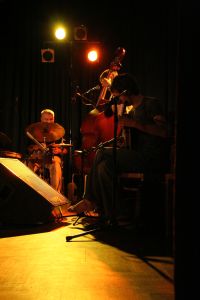 My wife Marci and I were sitting at a table in a crowded restaurant in our city of Edmonton. It was a Sunday evening, and we were attending a regular Sunday night ‘open mike’ – an opportunity for local musicians to get up in front of a microphone, sing their three songs, and then sit down again and listen to the efforts of their fellow musicians. We had been attending this particular open mike for a couple of years, and had gotten to know quite a few of the musicians, including the host, a bubbly and gregarious aging hippy who, I had discovered, was also a recovering alcoholic. She had come to sit at our table while one of the musicians was playing, and we were chatting about another musician who was causing her some grief at the open stage. “What do you think I should do?” she asked. And then she surprised me; “I guess what I’m really asking”, she continued, “is, ‘What would Jesus do?’”

Reflecting on this conversation later on, I couldn’t help remembering how flabbergasted this woman had been when she had first discovered that I was a pastor. A friend and I were helping her set up the PA system one night, and my friend made some comment about me being a man of the cloth. “Cloth?” the host exclaimed; “What cloth is that – a tablecloth?” And then, as it gradually dawned on her that my friend was serious, I saw a look of absolute horror flash across her face. Her attempts to backpedal were so funny, I wished I’d had a camcorder with me.

I’ve been playing folk music all my life, but in the last three years, for the first time, I’ve stepped out of my Christian bubble into the live music community here in Edmonton. I started playing at a Monday night open stage run by Chris Wynters (of the Edmonton band ‘Captain Tractor’); from there I discovered other events, in pubs and coffee shops, and I began to make a whole new community of friends. I was not doing this out of any overt evangelizing agenda; I simply wanted to find a way to relax in the city, and music seemed like a good way to do it. But it has been interesting, as I’ve gotten to know people in the music community, to see how many opportunities I’ve had to be a witness, or simply a caring Christian presence.

A local songwriter hosts a monthly songwriter circle at his house; I’ve participated in it fairly regularly for a couple of years, and we’ve become good friends. He says he is an agnostic, but I often kid him that he seems to write a lot of songs about the God he’s not sure is there! Sometimes he asks me for my thoughts on lyrics he’s writing – usually when the lyrics have references to God in them. These conversations lead in some really interesting directions. Last year this friend agreed to participate in a fundraising concert for Habitat for Humanity which was held at our church. This was very good for our concert – it brought in a few people who wouldn’t have been there otherwise. But I think it was also good for my songwriting friend; he has a pretty low opinion of organized religion in general and clergy in particular, and I think his participation in the concert gave him an alternative view.

Another new friend and I have started playing gigs together; he is a very fine lead guitarist and has also helped me record some of my songs at his home studio. I asked him to help out this past December with a special musical number we were doing at our Nine Lessons and Carols service at St. Margaret’s Church; he and his girlfriend came to the service, and afterwards she commented on how much she enjoyed it and how she was hoping to be able to drop by on an ordinary Sunday sometime, when we weren’t doing a ‘special’ service. Last time my wife spoke to her, she had bought a daily devotional book and was finding real inspiration in reading it every day.

What’s the secret? I don’t think it’s especially complicated. I think you need to find something that you are really interested in doing, and then find some non-Christian people to do it with. And the objective, at the beginning, can’t be overtly evangelistic; people seem to sense instinctively when you are only there to convert them, and they don’t tend to respond well to that approach! I didn’t begin to attend open mikes to evangelize; I went because I wanted to play music. But, once I was there, I decided to be myself: not just a musician, but also a follower of Jesus. And because I’d earned the right to be heard – both in terms of being a credible musician, and also in being genuinely interested in other people’s lives and willing to listen to their stories – well, then the opportunities for witness gradually began to come my way. 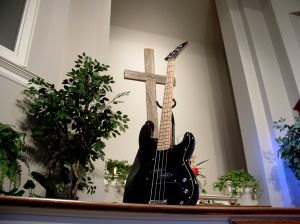 One thing I have resisted is the temptation to sing ‘evangelistic’ songs. I’ve been at the open mics when others have done that, and I can almost feel the audience’s resistance rising. To me, the songs I sing are simply a bridge I build into the lives of the people who are listening. Afterwards, when we’ve become friends over a few months’ worth of coffees and hours of listening to music together, I can use that bridge to speak a word of witness at the right time.

I don’t think I’ve got it quite right yet; I can’t report any spectacular conversions, and I suspect that at times I’m still a bit too backward about speaking about my faith. But for the first time in my life, I feel like I’m really engaging in regular relational evangelism. And I’m excited to see what the Holy Spirit is going to do with it.

Tim Chesterton is rector of St. Margaret’s Edmonton, and has already become an informal resource for the Diocese of Edmonton in the areas of teaching the faith to seekers. In September 2005, his book on this topic, Starting at the Beginning was published by the Anglican
Book Centre.