The second speaker at Monday’s RightNow pre-conference was Matt Chandler. Before this conference, I knew little about Matt except his recent cancer diagnosis. Matt pastors The Village Church in Texas.

He began with a warning that much of what passes for Christianity today is actually a Moralistic Deism. He says this has occurred because the gospel was simply assumed, and church culture focused on teaching about sanctification at the expense of justification. He defines the former as a process, where we join with God to become more and more like him, and less like us. He countered this by preaching through the book of Ephesians when he first arrived at The Village Church, at the time a church of 160 people, and now numbers in the thousands.

Matt then shared two ways of telling the gospel in four points, both true, but often portrayed as if they are mutually exclusive. One is the gospel “on the ground” – beginning with the action of God, then humanity, then Christ, then response. The other is the gospel “in the air” – beginning with creation, then the fall, redemption and consummation. He skilfully reconciled these two as one gospel, both fully dependent on the atoning work of Christ. His entire talk was driven and connected by scripture passages, particularly here as he illustrated the fullness of the gospel with scripture about what we are saved “to” and “from”. I think this air-ground distinction will be helpful in teaching the gospel in Christianity 101.

In a later Q&A – he was asked about transformation of legacy churches. He shared a few principles from his arrival at the Village Church, particularly that elder saints be asked to help in transformation. He then told the story of an older church member who he enlisted to disciple and teach life skills to young men. After some time in this ministry, the man said, “as long as young men keep coming to Christ, I don’t mind the music.”

All around, best talk of the day, thanks to both the content and the man. They are clearly one and the same.

A question for commenters: Is Moralistic Deism the prevailing religion in Canada? Or something else. Perhaps just deism? 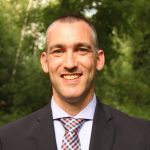