Why Create a Podcast for Skeptics?

Life is a journey. That’s a good metaphor; let’s go with that.

Now, all of us have a map for this journey. These maps can be religious or secular, held consciously or unconsciously, but each one tells us where we should go, how we can get there, and what we’ll see. Christianity too presents a map, drawn with the teachings of the Bible and centred on the person of Jesus Christ. Evangelism is, essentially, inviting and persuading others to join our journey as we follow our map.

We Are Not “Here”

However, those of us who invite others to this journey face a number of self-inflicted problems which damage the credibility of our invitation. Some of these are perennial, such as religious hypocrisy, bigotry, violence, coercive evangelistic practices, and so on. But there is one key problem that is more specific to this age. If you look up a map on your phone, you’ll notice a flashing dot, or a red arrow, or something that indicates you are here. Maps posted at parks, hiking trails, or malls have similar symbols that say, “You are here.” Likewise, how we’ve typically presented Christianity to others assumes an identifiable starting point of our journey: you are here.

The problem is, we are not “here.”

Those of us who were raised in secular, modern societies find ourselves in a world that does not match what our reading of the map tells us we should see. Religion is no longer a prevalent part of our culture; fewer people believe in objective morality, or life after death, or a creator of the universe; what we learn in the sciences, the arts, and history seem to go counter to what we learn in the Bible; our society increasingly finds no need for a god to understand our world or to live in it. The landmarks and features that were supposed to be around us at the starting point of our journey are missing from our world.

Now, if a map said we were on a path winding through a village perched upon a scenic mountaintop, but we found ourselves instead in a walled town on a barren hill in the wilderness, we’d question the credibility of the map. Or worse, we could misidentify the features around us with what’s in the map—say, the walled town with the village, or the barren hill with the mountain. Then, we’d become more and more lost as we followed the map until we abandoned the entire journey. Maybe, afterwards, we would write books or start podcasts about de-converting from our journey, or deconstructing our map.

This obviously is a problem for evangelism. Holding a different worldview is much more significant than just holding a different map; it’s like inhabiting a different landscape. So, imagine that someone presented us with a map that seemed to get everything wrong about the land we saw around us, and then invited us to join their journey. We’d very likely refuse! And if they argued that their map was somehow correct, we’d simply say, “This is not what I see.” If they claimed that their map was of a different, faraway land, which we would only see after we joined them, we’d be suspicious; if they didn’t have a working map for what was around us now, why should we trust that they could get us to some distant land we had never seen—a land which could very well be just a figment of their imagination?

Now, perhaps we would still join them if we had come to deeply trust that person—we might not trust the map, but we would trust the one following it. This, of course, is why Christ-like living and community is so crucial to Christian witness. However, we would be more likely to say to them, “I really respect you, but I think you should ditch your map—in fact, take our map and join us!”

However, our map is not wrong, nor is it just of some faraway land; we just marked the wrong spot on the map as “here.” That means we need to relocate where we are and re-read our entire map. We need to reorient ourselves to this different landscape and identify all the landmarks again: perhaps the mountaintop where the village sits is that distant mountain on the horizon; perhaps this wilderness around us is the hinterlands drawn on the map below that mountain. Then, we need to re-plot our entire journey from our new starting point. There’s no need to return to the mountaintop village; we need to begin our journey from where we are now, where we became lost.

This is the project I first outlined in my book, God at the Crossroads of Worldviews, and now engage with in the podcast “What do you mean God speaks?”, which describes itself as “a series that retells key ideas, insights, and stories in Christianity for the skeptics who want to understand religion, Christians with questions about their own beliefs, and everyone in between.” I hope to expand its content further to different mediums, such as books and YouTube videos, while trying to reach beyond the current limited following. Yet these projects remain but the first fledgling steps in unfamiliar territory in our renewed journey—one which the Church of this generation needs to take. A key part of what it needs is people who can connect this series to the skeptics, seekers, and Christians faced with questions from our new landscape.

So I invite you to check out the series “What do you mean God speaks?” and then share it with the skeptics and seekers in your own lives. 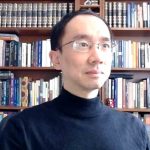 Paul Seungoh Chung is the author of God at the Crossroads of Worldviews, has taught at the University of Toronto and Wycliffe College, and served as a pastor at TKPC Mosaic and Garden Church. He is currently the series creator of the podcast “What do you mean God speaks?”

View all posts by Paul Seungoh