What John Stott Taught Me About Personal Evangelism

This article is part of our Wycliffe Faculty series, in which the faculty of such diverse departments as biblical studies, theology, and history write about mission and evangelism. As somewhat of a shift from Good Idea’s usual focus, we hope you enjoy reading about their perspectives on the mission of the Church today.

On the evening of February 13th, 1938, a sixteen-year-old lad knelt by his bed in his dormitory in Rugby, England, and opened the door of his heart to Jesus Christ. John Stott marked the date of his conversion every year for an additional seventy-three years, until his death in 2011 at the age of ninety. The way he describes it, the conversion was a rather solitary affair, a personal decision made quietly in the dark of night.

But, of course, the moment was preceded and surrounded by a great nexus of events, individuals, and influences that shaped his understanding of what happened that night. John benefited from the guidance of his pious mother who brought him to church. He had read his Bible and was familiar with the Christian story, and was even inspired by its high ethical ideals. Closer to the moment of his conversion, other evangelistic agents entered the picture. A Christian school chum invited him to attend a series of meetings featuring Christian speakers. When a young evangelist from the Christian Union presented an address on Pilate’s question, “What then shall I do with Jesus, who is called the Christ?”, it dawned on the young man that he actually had to do something with Jesus. A subsequent conversation with the evangelist made the way of salvation clear to him, and that evening he surrendered his life. Even so, John would go on to give primary credit for his conversion to God himself, for it was he who had enabled John to ‘open the door’. John Stott soon became a student leader in the school Christian Union and in the Cambridge Inter-Collegiate Christian Union (part of Inter-Varsity Fellowship) and was instrumental in leading others to Christ.

Those who are familiar with John Stott will know that he went on to become one of the premier evangelists of the twentieth century. Over the cours e of his career, he would lead over sixty university missions, and he appeared on stage with Billy Graham. However, it was personal evangelism that quickened John’s pulse. He had a spiritual discernment for the seeking soul and always made himself available for individual counsel after his sermons and addresses. Even when he was no longer able to preach, he carried on lengthy correspondences with questioners from around the globe. So important to him was personal evangelism that he took up the theme in his earliest published writing, which he wrote while at seminary in the late 1940s. This publication is a thirty-six page, shirt-pocket-sized booklet called Personal Evangelism. Contemporary readers might find some of what it says of interest.

The Presentation of the Message

To begin with, he says that personal evangelism is even more valuable than preaching, since the message is addressed to the particular needs of an individual. This means that personal evangelism will be focused and deliberate. Opportunities to share faith may present themselves to us, but John encourages us to pray that God would give us a particular burden for one or two people, and then give us grace to respond to their spiritual needs. This will happen as we develop friendships with them, even if this involves personal sacrifice on our part; pray for them “systematically, definitely and perseveringly”, for it is the Spirit of God that draws people to Christ; live lives that do not undermine the beauty of our message; and finally, take them to hear the gospel preached. This last bit of advice may come from a context where evangelistic missions were much more common than they are today. And yet there is wisdom in going with a friend to hear a searching message that may open up avenues of deep discussion.

Having laid out this groundwork, John discusses the presentation of the message of the gospel. Here he anticipates a time when we and our friends will be ready to ask and receive the question: “Would you like me to explain to you as simply as I can just what it means to be a Christian?” The ensuing explanation will have three essential components: the fact of human sinfulness and the need for a Saviour; the meaning of the cross; and the need to respond to Christ’s offer of forgiveness. The necessary response, of course, is not just a matter of intellectual assent or what has been called ‘easy believism’. John goes on to describe the cost of discipleship, and says that genuine faith will involve repentance, surrender to Christ’s lordship over every aspect of our lives, and the willingness to let others know that we have made this decision.

John thus acknowledges that it is not easy being a Christian. However, he also discusses incentives to faith that those who are seriously considering becoming followers of Jesus Christ should take into account. The first incentive is that we need Christ for our own sake. The Holy Spirit works within us in the transformation of our character and in the satisfaction of our deepest longings—something that is impossible by our own means and initiative. Secondly, the world needs people who have yielded themselves to God’s righteous purposes on earth. This is the giving of ourselves for others. But these reasons are subsidiary to the one great incentive: that Christ must be lifted up and glorified in our deeds and words. This was certainly John’s primary motive in all of his ministry. As the epithet on his burial marker in Wales testifies, he “resolved both as the ground of his salvation and as the subject of his ministry to know nothing except Jesus Christ and him crucified.”

So, these are the essential steps in personal evangelism, according to John Stott. At this point, we have discussed just over half of his little booklet. Subsequent sections treat common obstacles to faith (doubt, pride, sin and fear) and provide strategies for ensuring that our friends’ decisions are made intelligently and with integrity. Here we receive insights drawn from John’s considerable experience: Help your friend to understand that certainty does not rest on emotion, but on the promises of Christ. Offer your friend Christian literature. Invite your friend to join you in attending Christian gatherings. Indeed, help your friend to reframe his or her self-understanding in relation to God, the Church and the world. The nurturing of a friend’s new-found faith will involve new habits of prayer and Bible reading, an introduction to a whole new fellowship, and a new attitude towards their former life. The comprehensive nature of evangelistic follow-up turns out to be a long-term affair, and “the crown of our endeavours,” John writes, “is that he whom we have laboured to bring to Christ out of the world should go back into the world with Christ, as a witness.”

And so, in the end, what presents itself as an instruction booklet on personal evangelism becomes an encouragement for us to be mature disciples ourselves. Those who wish to be instruments in the Christian transformation of others should be serious students of the Bible, be willing to learn from their mistakes, and continually rely on the Holy Spirit. As John writes in conclusion, “The principle secret of successful evangelism is the humility which leads the evangelist to recognize his own weakness and to rely on the Holy Spirit’s power. [. . .] Our hearers will be convinced and will turn to Christ not through our eloquent reasonings so much as through the unanswerable ‘proof’ which the Holy Spirit will add to our feeble words.”

John’s little booklet is clearly a reflection of his age and culture. Where we might imagine conversations that are more spontaneous and casual, John takes a more structured and systematic approach (make sure you will not be interrupted, he counsels, and bring two Bibles, one for you and one for your friend!). John had a very methodical mind, and this is part of why he was such an outstanding leader. But I do not think that anyone ever felt that they were being pressured or manipulated in John’s evangelistic encounters. For he also possessed a sensitive and compassionate heart, and those who came to him for counsel found comfort in his deep love for them and for his Lord.

Stephen Andrews, the Principal of Wycliffe College, is also a former research assistant to John Stott. 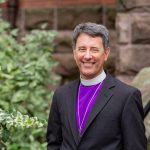 Bishop Stephen Andrews is the Principal of Wycliffe College and the Helliwell Professor of Biblical Interpretation. His academic interests lie in the area of Jewish biblical interpretation in the Second Temple period. Stephen has served as the former President of Thorneloe University in Sudbury, and as Bishop of the Diocese of Algoma. Stephen and his wife have two children. He also enjoys birdwatching, travelling and woodworking.