What is Messy Church Actually Accomplishing?

It’s multi-generational. It’s loud. It’s Messy Church. And according to this researcher and writer, it is changing how families experience church, and how — and when — church welcomes families.

Over the past decade a new form of church has arisen and begun to spread across the U.K., Canada, New Zealand and Australia. It is a multi-generational and multi-sensory worship and learning experience called Messy Church, in which grandparents, parents and children participate in crafts, singing, storytelling and games, focused on stories from the Bible and key Christian teachings. Often partnered with a shared meal, Messy Church is highly social and interactive. It’s creative, chaotic, fun, and almost always messy. But there are hard questions being asked of Messy Church. Is it really worship? Is it reaching people that can’t be reached throughSundayChurch? Will it ‘bleed’ people further away from Sunday worship? Is it actually making disciples of Jesus Christ?

In the spring of 2011, as the focus for my doctoral research, these and other hard questions were explored as they relate to the people attending Messy Church at Christ Church in Oshawa, Ontario.

My goal was to discern if this new form of church could enable an established parish to reach marginally-churched, de-churched and non-churched people. The results of the study have widespread implications for such things as worship, church planting, discipleship and the role of the home in the religious education of children.

While it isn’t possible to discuss the full breadth of this research in one short article, I’d like to present just one area of learning from the study: behavioural changes in four key areas, which occurred in the lives of the families involved in the study.

Every family interviewed reported an increase in basic knowledge of the Bible. One mother, who attends Sunday church only marginally (i.e. no more than two or three times a year), indicated that not only was her son learning the stories told at Messy Church but also that these were a topic of conversation afterwards. A second marginally-attending mother highlighted that not only was her child learning the Bible stories, but she too was re-learning them due to their participation. “And you know even just review of the stories for my own self. So even with me, it’s refreshing my memory about a lot of things that I learned.”

This comment about the stories being a good review for parents and an introduction for the children also was echoed by a de-churched grandmother (i.e. who attended as a child but had stopped going to Sunday church). “Well, I think for me it’s a refreshing my memory of the stories … so the lessons we learn we can incorporate into our daily life and it’s not just me and my ideas. . . . It’s what other people are learning too, and it’s in the Bible.

MessyChurch’s format of telling the Bible story via various media followed by reinforcement of the story through songs, games, crafts, and take-home activities are helping these families know key Bible stories. For many of the marginally churched and de-churched parents and grandparents, this reminds them of stories they once knew. For the predominantly non-churched children and grandchildren, this provides their first introduction to the great stories of the Christian faith

Talking With their Children About God

A second change in behaviour reported among all of the participating families involved parents and grandparents talking more with their children about God. A mother who was baptized as an infant, and then never taken to church again recognized that MessyChurchnow enables her to have conversations with her children that would not occur otherwise. “I would say we are talking more with them about God now… the first part is the children have questions now . . And there are times, where we will engage in a conversation. . . and I attribute that all to the fact that we come here.”

By participating together inMessyChurch, the study families found that this gave them a reason to be discussing God and issues of faith. Sometimes we assume that Christian belief precedes Christian behavior; yet, in the case of these families the interview data suggested that Christian behaviors such as participating in worship together can lead to parents talking with children more about faith, which in turn can lead to deeper belief.

The third change in behaviour (reported by 82% of the participating families) involved more regular worship of God. One mother, whose husband’s shift work affects their ability to attend Sunday church as a family, sees MessyChurchas an opportunity for her and her daughter to attend a form of church together. Although they have moved to another nearby city and only attend Sunday church a few times a year, she continues to attend MessyChurchalmost every month. “Our schedule is pretty busy and [her husband] works odd hours, so going to church as a family on a regular basis is pretty difficult. For him to get weekends off is like pretty difficult . . . so I find that Messy Church is really convenient, and it’s a good way to have that time at church with [her daughter].” A de-churched mother, who was raised in the Church but hasn’t attended Sunday church regularly since her children were born offered this comment, “Yes, we are worshipping more . . . .we try to come on Sundays, but if it doesn’t work out . . .it just wouldn’t be happening . . . whereas this [Messy Church]. . . . it’s once a month, and they know that we’re going. . . . and so it’s never an issue because they look forward to it and they’re excited to go.”

It’s worth noting that these comments reflect the view that regular worship is something that can now happen just once a month. This understanding parallels that of Sunday church attenders, whose frequency of attendance at worship seems to be decreasing with increased demands on Sundays for such things as employment, child-custody arrangements, and organized sport schedules.

A final change in behaviour reported by the families was an increase in praying together. During the study, 47 percent of the families reported this. The following excerpts, from two different de-churched families, describe two of the ways prayer is increasing in the lives of these families: “Since coming, the kids are reminding me more about praying. . . . They will say, ‘Mommy we haven’t prayed in a while’. . Or when mom and I or the whole family is together my son likes us all holding hand and praying together. . . . it’s a big thing.” And another: “Before I started taking her to Messy Church we didn’t say grace [at meals . . . .Now we all hold hands and say, “Thank you God for our food”. . . . the other day her father was over and . . . [she] was like, bouncing all around and saying “Thank you God.” And he said, “What’s she saying?” and he held hands too and joined in. . . . and then he said, “Oh, that’s something I want to start at home too.”

Both of the above comments refer to praying at meals. To many Christians, this may seem to be a small change.

However, all behavior related to faith begins somewhere. If a family can begin to pray at mealtimes or at bedtime with their children, then perhaps they also will be more likely to begin to pray in times of need or celebration.

By being willing to meet families where they are, and by recognizing the need for alternatives to traditional Sunday worship, established churches can build missional connections with people they would otherwise find it very hard to connect with.

Watch for a future article, related to this same research study, about why traditional Sunday church doesn’t work for many families, and yet how Messy Church actually brought growth to one congregation’s Sunday worship.

Judy Paulsen is rector of Christ Church, Oshawa, where church gets messy once a month on Saturday. 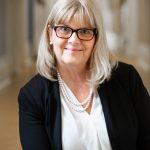