This column usually features a “good idea” somebody had for reaching people with the Gospel. I want to depart from that a bit, and share a few stories which demonstrate that God often brings people to his Church and to Himself without anybody’s good idea, and in the most ordinary of circumstances.

I was eating a TV dinner for my lunch in the church kitchen. My wife had cheerfully told me she had only paid $2.99 for it. It was worth every penny and no more! A pleasant-looking man came into the kitchen, and thinking he was a delivery-man, I asked if I could help him. He replied in slightly formal English, “Yes, I would like to know how to become a Christian.”

Eagerly putting my dinner aside, I took the gentleman into my office. He was from a Middle Eastern country. When he was a boy he had seen a bad Hollywood movie on the life of Jesus Christ. He vowed to himself that if he ever were to leave his homeland, he would become a follower of Jesus Christ. I asked him why he had chosen our Anglican Church, and he replied that news of his baptism would be less likely to reach his homeland. Such news could put his family members in danger. I had the joy of baptizing him some months later. I also had the joy of baptizing his older sister, again, in rather unusual circumstances.

What a thrill! No elaborate plans on my part, but the sovereignty of Almighty God, bringing to fruition the decades-old vow of a little boy.

Bev was a woman in her 70’s who warmly welcomed Diana and me when we moved into a new condo. She had us over a few times. I have no recollection of how she started the conversation, but here’s what she said. She’d had a serious illness most of her life, but she was the type of person who didn’t let it stop her from being a wife, a mother of two boys, and a sharp business person. Her husband had no interest in church, and when her boys reached their teens, it was just too hard to get them to church without her husband’s support. Not an original story, I’m sure. So she gave up. But her husband had died recently, and the appearance of the local Anglican clergyman in her condo complex, triggered a repressed desire on Bev’s part, for the things of God.

She recruited her next-door neighbour, whose story was almost identical, and for a year Bev and her friend trotted the twenty-minute walk to the 8:00 a.m. Eucharist at my church. Bev was supposed to walk to alleviate the life-long illness that was finally to claim her life.

I was always a little embarrassed. Attendance at the early service was pretty small. But these two ladies loved it. Every Sunday they raved about the sermon, and the liturgy. Both were making up for lost time, and as it turned out, their zeal was justified. Both Bev and her friend died just a year after they had started the journey back to church.

I still think from time to time of these two ladies who came out of nowhere to give their lives to Jesus Christ. What a blessed year! How could I be so blessed! Again, the sovereign work of God.

My final story is of a middle-aged couple who came to a funeral service for the elderly lady who lived next door to them. They came out of courtesy for the family and respect for their neighbour, who had been a faithful worshiper and a mentor to many young women. The funeral was to have been a one-time visit to the church. But something drew them back the following Sunday. Something called an ‘Alpha Course was being offered, and they had a sense they were supposed to sign up. Nobody invited them, nobody ‘witnessed’ to them. In the course of Alpha, they both fell in love with the Lord Jesus. They haven’t looked back.

A church kitchen, a condo building, a funeral service. Just ordinary places. And yet God uses ordinary places, as well as our ‘good ideas’. Let’s be on the lookout when in the most ordinary circumstances, God sends people to us whom God has already prepared for his Kingdom. What a joy to be allowed to stand by and watch. 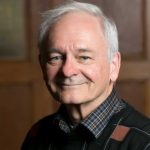 MURRAY HENDERSON has over 45 years of experience in ordained ministry, during which he has grown churches in three Anglican dioceses. His greatest thrill in ministry is to invite people to come to Jesus Christ as Saviour and risen and ascended Lord, and help other Christians give a reason for the hope that is in them.  He currently mentors theological students in a ministry-placement hub of Wycliffe College. Murray has a BA from the University of Manitoba, an STB (now MDiv) from McGill University, and a Doctor of Ministry from the Canadian Theological Seminary in Regina. He is married to Diana, and they have three adult children and five grandchildren. When he’s not engaged in all the other activities of a recent retiree, Murray can be found on the squash courts where he’s an enthusiastic player!

View all posts by Murray

Murray is also an Institute of Evangelism Mentor and can help your church to better work with personal sharing of faith.

Murray will help churches assess their present attitudes towards Christians sharing their faith with friends, family, neighbours and colleagues. They will also learn how to share, simply and respectfully, what their faith means to them.