The most important lesson I have learned in school chaplaincy, insofar as it relates to the Church and its mission, touches on an attitudinal question: how does one faithfully engage with the secular world?

As a priest, who for almost 20 years worked in a Christian cocoon (aka a local established church), this question became pressing when I shifted into my new, more secular and multi-faith environment at a large private girls’ school in Toronto. While this may not sound like the sort of engaging “how-to” approach that Good Idea usually profiles, the topic is the foundational undergirding on which practical know-how skills are added.

The unforgettable sermon and a missional stance

The answer I have arrived at, as a newbie chaplain, has ended up being more or less the one I was first offered in chapel at Wycliffe College, when I was still a seminarian. Actually, it was less that I was offered an answer, than offered a “missional stance”. This I have adopted and expanded for my work in chaplaincy. It is now the starting place in my ministry with any teen, inside or outside the Church and it is a stance that looks out at the world with both humility and hope, resting on the assurance of the sovereignty of God.

I don’t know if anybody else remembers this particular Wednesday chapel message, but I have never forgotten it. The preacher was a former New Testament scholar, Dr, Andrew Lincoln, and he chose as his text, a most difficult one:”Hagar had been expulsed from her home, and her son Ishmael was dying.”

Hagar, unable to bear the sight of her son’s anguishing death, looked away. But, Dr. Lincoln noted, God did not look away. God saw Ishmael. Although Abraham looked away from his son, and eventually, in despair, even so did his mother, God never looked away.

Andrew spoke, in details I no longer recall, about a God who loves the whole world in general, while also specifically covenanting with Abraham and his offspring. The Bible makes clear that God is the scriptwriter of the Salvation Story. God’s special love for a chosen people does not mean that God is not also mindful of, and active amongst, the other descendants of Noah. While Andrew may not have mentioned them in his sermon that day, I think of other biblical accounts in line with this stream of thought: God sending Jonah to Nineveh; Jeremiah weeping for the nations of the earth; Jesus’ encounter with the Samaritan woman. God’s care isn’t just specific, it is also generous and expansive. Whenever we look outside the church doors we need to remember that there is no missional terrain where God has not already trod.

Listening with expectancy, naming with hope

That’s it, really. That’s the stance I learned over 20 years ago, and now put into practice every day at work. I go to work in the morning hopeful and expectant, because I know that not only is God the God who covenants with his people, God is also the God who works outside the tents of Abraham. And it has shaped how I understand the starting place of ministry outside Church doors.

This means that much of my work with teens is about listening to them and their stories and looking to see where God is already at work in their lives. I do not believe that mine is the first spiritual conversation they are having, because I trust that God has started that conversation in a way I have yet to discover. My job is to discern that, and sometimes to give them a vocabulary to describe what is going on: “This is God at work in your life.”

The temptation, I think, when ministering, is to presume that our role as Christians is first to tell God’s Story. Certainly, that is part of the calling. But before we can tell, we need to listen. We need to listen to God’s story as it is unfolding in the individual’s life, and then see how we can join in. 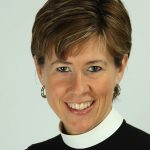 The Rev. Stephanie Douglas-Bowman is an Anglican priest and mother to three children. Ministry to children and families has always been the focus of her close to twenty years of parish ministry. In fact, she likes children so much, she recently made a career change into school chaplaincy at Havergal College in order to spend more time with them. She is also doing her doctoral studies on the spiritual formation of children, with a focus on the domestic church. Stephanie understands well the joys and challenges of ministry to children in both big and small churches, and is all about working smart with the resources you have.

View all posts by Stephanie

Stephanie is also an Institute of Evangelism Mentor and can help your church to better work with children & youth.

Stephanie can help churches with youth and children's ministry