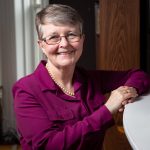 Marion Taylor grew up in Toronto and began her academic studies at the University of Toronto. Marion’s interests in the Old Testament are broad. She teaches a variety of courses, including Women Interpreters of the Bible. Most recently she has focused on forgotten women interpreters of the Bible. Marion began her search for forgotten women interpreters of the Bible in 2002, when a student asked if she could write a paper on a woman interpreter from the 19th century. This question has taken Marion on the greatest adventure of her life, as she and a team of students and scholars have unearthed the names and writings of hundreds of women throughout history.
In her spare time, Marion loves to read, write, and walk her dog at the family cottage in northern Ontario.

I remember the day when I discovered that in 1805 a woman named Sarah Trimmer (1741–1810) had published a commentary on the entire Bible.[1] I was flabbergasted! In my training as an Old Testament scholar, I had never heard of women writing biblical commentaries before the 1960s. I soon discovered that Trimmer had published more than forty books, including children’s books, textbooks, a teaching manual, biblical and historical prints, political pamphlets, a spiritual autobiography, and two magazines, The Family Magazine (1778–89) and The Guardian of Education (1802–06). She also had founded Sunday schools and an industrial school.

Who was this remarkable woman Sarah Trimmer, and why was she so committed to sharing the faith?

Sarah Trimmer was a highly educated Anglican woman who began her publishing career as an author of educational books for children after the birth of her twelfth child. In 1780, Trimmer wrote a very successful book that introduced children to nature and the Bible, entitled An Easy Introduction to the Knowledge of Nature and the Reading of the Holy Scriptures, Adapted to the Capacities of Children. In this and her other books for children, Trimmer encouraged mothers—rather than fathers, tutors, and clergy—to read, interpret, and apply Scripture to their lives. She specifically empowered women to grow in their understanding of Scripture and to teach their own and others’ children.[2]

Building on her success as a Christian educator, Trimmer next published a six-volume series for children called Sacred History (1782–85).[3] This series provided an overview of the story of God in Scripture. It featured excerpts from Scripture together with Trimmer’s biblical commentary and spiritual lessons.

Sacred History was very popular. It gained even more traction when Robert Raikes (1736–1811), founder of the Sunday School movement, printed the second revised edition in 1788. The series was condensed, renamed Abridgement of Old Testament History and Abridgement of New Testament History, and beginning in 1793 it was included in the book list of the Society for the Propagation of Christian Knowledge (SPCK). Can you believe that it remained on the SPCK’s book list for seventy-seven years? More than 750,000 copies were printed.

Sarah was a woman driven by the desire for as many people as possible to know the story of Scripture. Therefore, she further extended her reach as a biblical interpreter with her popular commentary for adults who could not access expensive books. Her impressive commentary on the entire Bible was published in two volumes and also as a single 822-page volume. Trimmer’s A Help to the Unlearned looks like a traditional male commentary, as she comments on both whole chapters and individual verses. She tells readers that her commentary is generally in line with “the opinions of approved [male] commentators.” And that is true. But her gender and social location evidently influences how she reads some passages in Scripture. At times we can see that she is interpreting through her distinctive lens as a privileged English wife and mother who feels called as a “handmaid to the Lord” to educate the lower classes.

Perhaps it’s not surprising that Trimmer received some pushback from men who didn’t think women should be commenting on Scripture. One reviewer of her commentary suggested her “breezy tone detract[ed] from the dignity of a grave and learned commentator.”[4] But Trimmer had no intention of writing like “a grave learned commentator.” She was a Christian educator who wanted her readers to understand Scripture and apply it to their everyday lives.

While Trimmer pushed a number of boundaries, she accepted long-established restrictions on women’s roles in the Anglican church and the idea of assigned stations in life. Commenting on Paul’s words about Euodia and Syntyche, she explained that even though “women are spoken of as labourers in the Gospel . . . we must remember that they could not be preachers, for women were forbidden to teach in the public assemblies.”[5] I would argue that Trimmer herself was a preacher; she preached with her pen. And while she did not push boundaries regarding women preaching in the pulpit, she did push boundaries in many places. Her children’s Bibles, for example, featured strong women like Deborah and Jael who were recast in or omitted from contemporary children’s Bibles authored by men.

I also want to say that there is a timelessness about many of Trimmer’s comments in Scripture that I found very helpful when I was writing my commentary on Esther. Esther chapter 3, you may remember, narrates Haman’s successful ploy to get King Ahasuerus’s permission for a genocidal edict to kill a certain group of people—whom he only much later finds out were the Jews. Esther chapter 3 closes with the narrator’s comment that the king and Haman sat down to drink, but the city of Susa was confounded and perplexed. In her commentary on this closing scene, Trimmer correctly assesses the threat that Persia’s king posed to Jews and indeed to all Persians. And then she draws a lesson about the dangers of listening to fake news:

Ahasuerus was very unjust to consent that a whole people, who were under his protection, should be massacred without any inquiry into their fault, only because his favourite [Haman] had said that they were enemies to his state. No wonder that the city of Shushan should be perplexed, for it must grieve every humane or loyal person to see the king so absurd, and the innocent condemned to destruction. Observe, from this chapter, how dangerous it is to listen to detractors, and that we ought never to credit evil reports till we have first inquired into the truth of them.[6]

Sarah Trimmer is one of the many voices that have been silenced in history. She was a woman committed to the importance of making Scripture accessible to everyone, rich and poor, children and adults, especially those who could not afford expensive biblical commentaries. Above all, she wanted people to come to know and live the Christian faith. She was a voice of mission and wisdom to thousands and a voice that we should still listen to. While various editions of Sarah Trimmer’s commentary on the Bible can today be found on Google Books,[7] I hope that, above all, we find Sarah’s lived example something that compels all of us to help someone in our own lives come to know the story of Scripture.

[1] Heather E. Weir, “Trimmer, Sarah (1741–1810),” in Taylor ed., Handbook of Women Biblical Interpreters (Grand Rapids: Baker, 2012), 505–9.[2] Donelle Ruwe, “Guarding the British Bible from Rousseau: Sarah Trimmer, William Godwin, and the Pedagogical Periodical,” Children’s Literature 29, no. 1 (2001): 10–11.[3] Sarah Trimmer, Sacred History Selected from the Scriptures, with annotations and reflections, suited to the comprehension of young minds: particularly calculated to facilitate the study of Holy Scriptures in schools and families, and to render this important branch of education easy to the teacher, and pleasing to the pupil, 6 vols. (London: J. Dodsley, 1782–1785).[4] Weir, “Trimmer, Sarah (1741-1810),” 508.[5] Sarah Trimmer, A Help to the Unlearned in the Study of the Holy Scriptures: Being an Attempt to Explain the Bible in a Familiar Way (London: F. C. & J. Rivington & Hatch, 1805), 751.[6] Trimmer, 263.[7]https://www.google.ca/books/edition/A_Help_to_the_Unlearned_in_the_Study_of/Mi5VAAAAcAAJ?hl=en&gbpv=1&dq=A+help+to+the+unlearned&printsec=frontcover